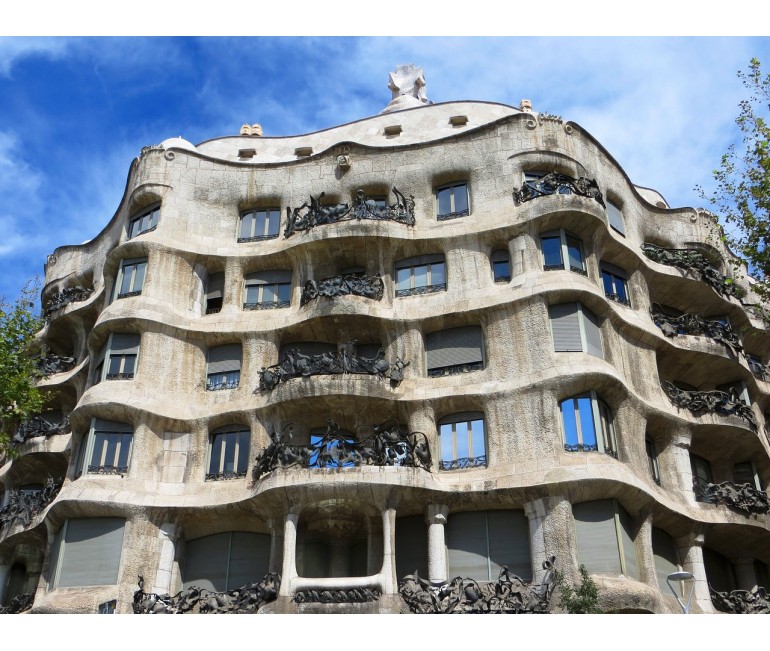 The ideal tour for people on a short visit: the only way to see everything, covering the distances and avoiding the queues. Visit all the best sites in Barcelona: Gaudí’s famous buildings – Sagrada Família, Casa Batlló and La Pedrera – the Waterfront with Columbus Monument and Old Port, and Montjuic Hill with its panoramic views over the city.

This broad elegant avenue was built for and by the wealthy Barcelonians and they have never left; luxury and design shops line the street along with major banks and the stock exchange. Architectural details include modernist lampposts and Gaudí’s tiles for pavements and a myriad of grand buildings including two of Gaudí’s houses: Casa Batlló and Casa Milà-La Pedrera.

The jewel in the crown of Gaudí’s works, the temple is a synthesis of his overall conception of architecture. The richness of detail and its significance need explaining in order to appreciate this fascinating and extraordinary building in full.

Gaudí wished the temple, which is still being built, to be financed by the people, not by taxes or funding, and that’s just what your entrance fees do (included in our tour price): finance the completion of the building started in 1882.

Tour members can stay on and savour the building for as long as they like. You can go up the towers by elevator, and visit the crypt and museum and compare the contrasting styles of the Birth and Passion façades.

Old Port: Separated from the Olympic port by long beaches and the old fisherman’s quarter, Barceloneta. The Old Port has been remodelled to extend the city centre down the Rambla into the harbour. Attractive and popular area with restaurants, shops, nightclubs and frequent open-air entertainment.

Columbus Monument: built in his honour in 1888, it is at the foot of the famous Rambla.

World Trade Centre: original imposing building by Henry N. Cobb whose aesthetic features are highlighted by the building being surrounded by water.

Mirador de l’Alcalde (the Mayor’s Lookout) stop: This terrace is a balcony over the Mediterranean with spectacular views over the harbour and the whole city. The bus will stop here to let you walk around and get the best viewpoints.

*We book the Sagrada Familia and Casa Milà entrances for you in advance, in order not to be waiting in the queue.

2 other products in the same category: