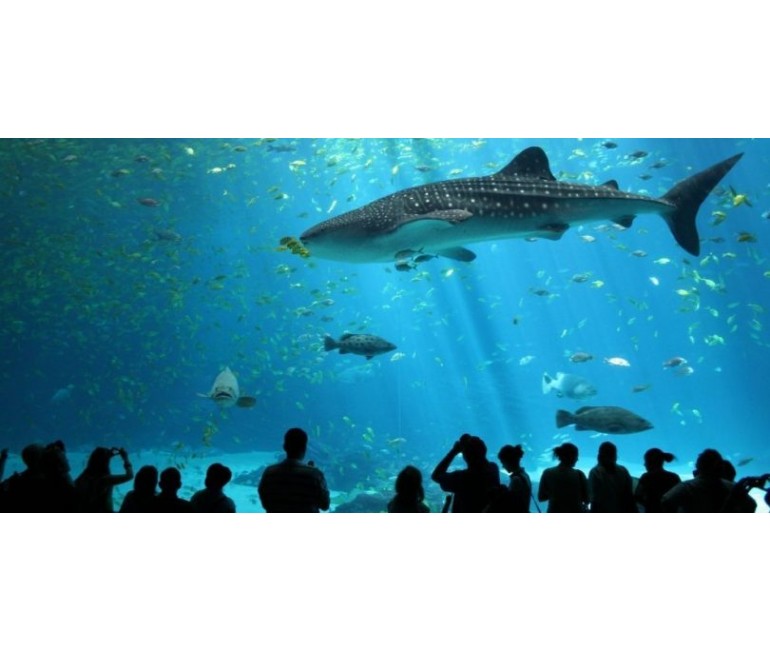 L’Aquàrium de Barcelona, the life under the Sea

What will i see?

Do you want to travel under the Mediterranean Sea in your visit to Barcelona? Try this tour and enjoy a microcosm of the Sea, the spectacular Oceanarium, which is unique in Europe with fast track entrance. L’Aquàrium is the best Mediterranean themed Aquarium and home to the greatest number of species. With a diameter of 36 metres and depth of 5 metres, it contains almost 4 million litres of water. It houses species as diverse as giltheads, moray eels, ocean sunfish, rays and two types of shark: the sand tiger shark (Carcharias taurus) and the sandbar shark (Carcharhinus plumbeus) – the real stars of L’Aquàrium de Barcelona.

Walk underwater inside the transparent tunnel of 80 metres and you will get surprise by the species living in there. Don’t miss the sharks and other curious species!

L’Aquàrium de Barcelona is the largest Mediterranean-themed aquarium in the world. To find out more about it without needing to get wet, we suggest that you delve deeper and deeper into discovering the 14 aquariums that represent the Mediterranean’s different marine communities.

In each aquarium, you can learn about the most characteristic species. You will also be able to observe two recreations of protected areas on Spain’s coastline: the Ebro Delta and the Medes Islands, and take a walk through the acrylic tunnel that runs the length of the Oceanarium, which gives you the feeling that you are swimming with the sharks.

A fascinating world of colour opens up before us under the sea. These are the coral reefs: unique, spectacularly beauty architectural creations built by small colonial invertebrates – corals.

The themed aquariums enable you to enjoy the small details of marine flora and fauna that you can use to learn more about the organisms you find.

After visiting our large aquariums and spectacular Oceanarium, the tour continues on the second floor. Planeta Aqua will help you discover many of the creatures that have adapted to the most diverse of aquatic environments: the bitter cold, the darkness of the deep, warm tropical waters. You can also admire the way different types of ray, such as freshwater stingrays and eagle rays, swim, thanks to an open tank containing 20,000 litres of water.

On Planeta Aqua’s circular mezzanine floor, you can observe living fossils and find out about phenomena such as camouflage, symbiosis, some secrets of oceanography and environmental issues. Through computer games, information panels, small aquariums and interactive elements, you can learn about the evolution of different mammals, reptiles and fish, which have all adapted to the marine environment.

Jewels of the sea

The sea conceals many jewels and treasures. Who hasn’t ever looked for shells on the beach and been surprised by the rich variety of shapes and colours? Molluscs are soft-bodied invertebrates that are often protected by a shell. They form part of a highly diverse, evolutionarily successful group that has managed to colonise a large variety of environments on the planet. Clams, oysters, squids, octopuses, slugs and snails are some of the best-known examples.

You can see some of the most exotic and amazing shells ever discovered and the tools that malacologists use to study these invertebrates.

Explora! is an interactive space within L’Aquàrium de Barcelona designed to raise children’s awareness of the marine world. It features over 50 interactivities in which children can touch, see, listen to, investigate and discover nature. It has three Mediterranean coastline environments represented: The marshes of the Ebro Delta, a corner of the Costa Brava and an underwater cave in the Medes Islands.

To be determined Shipping
0,00 € Total